The following article appeared in the Wellesley Townsman on December 11, 2014. 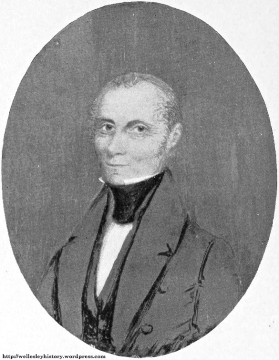 A bunch of colonial-era farmers don’t like traveling all the way across town to attend church, so they go ahead and establish their own church. And then over the years, that small community eventually grows large enough to obtain political autonomy.

Basically, the origins of every municipality in eastern Massachusetts follow this storyline. Even Wellesley. Perhaps you already knew that.

But there’s one part of the story relating to Wellesley that rarely gets told, and that’s the role of Thomas Noyes, the first full-time pastor of the town’s first church: the Wellesley Congregational Church in Wellesley Square. Which is quite a shame. After all, it was because of his leadership that the citizens of Wellesley — then living in what was Needham’s West Precinct — were able to coalesce into a tight-knit community that would deepen the rift between the two sides of the town, leading to the separation of Wellesley from Needham decades later in 1881.

First, however, we need some background, as Parson Noyes didn’t enter the picture until well after the rift had formed. But it’s pretty straightforward. Prior to 1774, there had been just one church that served the few hundred families who lived scattered throughout the Town of Needham. And because that church — which was also the town’s meetinghouse — was located on the east side of town, those living on the west side had no choice but to travel several miles to attend services or meetings.

The destruction of that building by fire in 1773, however, provided an opportunity for change. But with a small majority preferring to rebuild the church on the same site, rather than at a more central location, the western residents appeared out of luck.

So they took it into their own hands — quite literally — and the following year constructed their own church on the site of the current Wellesley Congregational Church.

Unfortunately, the establishment of a new church created a new problem: a lack of money. With such a small congregation — comprised almost entirely of poor farmers, no less — the church struggled mightily to provide any impact within the community. Factor in the economic disruptions caused by the Revolutionary War and it’s remarkable that the church even survived.

The arrival of Thomas Noyes in 1799 therefore couldn’t have come at a better time.

Almost immediately, the church was able to strengthen its foothold. This was, no doubt, the result of the pastor himself. He was highly skilled, not just in terms of pure intelligence — although having a Harvard education didn’t hurt — but also in his ability to relate to the common folk and use more than scripture to teach life lessons. Simply put, his parishioners understood his sermons.

Some of these sermons dealt with issues of war and peace. Others delved into the notions of hope and sorrow. There’s even record of a few seemingly anachronistic lessons that taught the need to be compassionate to animals. One chastised ‘turkey shooting’ — a popular pastime that was exactly what it sounds like — while another was about the wonder of bees. (Apparently, Parson Noyes loved honey and even developed novel techniques to extract the sweet food from hives without harming the insects.)

But the reverend did more for the church than just write and deliver sermons. He also oversaw the establishment of Bible classes, catechized children within the district schools, and even held small meetings for prayer and religious conversation at his own home, a small cottage located on Washington Street nearly opposite the current site of St. Paul’s Church on what are now the Town Hall grounds. (The house burned down between 1856 and 1863.)

By the time his pastorate ended in 1833, the church really had become the center of the community. Sure, it still struggled financially — what church didn’t? — but with the railroad coming through town a year later and the subsequent arrival of several wealthy businessmen who would contribute heavily to the church’s coffers, the future looked bright.

And so it’s actually quite fitting that, given his significance to the development of the Wellesley Congregational Church, or Village Church, as it became known — and thus the development of the Town of Wellesley — the pastor hasn’t been completely forgotten. Certainly not by anyone who has noticed the inscription marking the location of his tomb under the steps leading up to the church’s main entrance. Placed there following the building’s construction in 1922-23, it’s a simple, yet striking memorial to the man who really is the foundation of the church.