The following article appeared in the Wellesley Townsman on September 4, 2014. 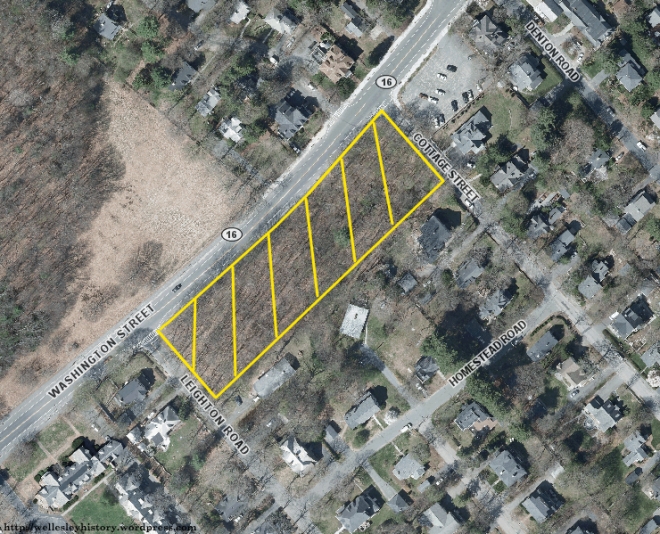 The North 40 seems to be all anyone is talking about these days. (And rightly so!) But there is another parcel of land that Wellesley College may sell in the very near future to which nobody is paying any attention: the Rollins lot.

Located at 636 Washington Street, this parcel is comprised of one and three-quarter acres of woods bounded by Cottage Street and Leighton Road. At most five single family dwellings could be built there. (The two most eastern lots are located within the Cottage Street Historic District. Any houses constructed on these particular lots must therefore get design approval from the Historic District Commission.)

So who exactly was Rollins? And how did Wellesley College come to own this land?

Rollins refers not so much to a specific person but rather to the family that owned the property from 1868 to 1937. Originally, this estate was much larger — approximately 20 acres — stretching from Washington Street to Fuller Brook between Cottage Street and the site of Upland Road.

The centerpiece of the estate was a grand three-story Second-Empire mansion that had been constructed in the late 1850s for Abijah Baker, the pastor of the Wellesley Village Congregational Church who had been unceremoniously removed from the pulpit in 1861 following outrage from his parishioners over his opposition to the use of force in suppressing slavery within the South. (That’s a whole other story!)

Unfortunately for this article, no member of the Rollins family was remotely as interesting as Reverend Baker. When the family arrived in Wellesley, it consisted of John Rollins, a successful builder and contractor, his wife, Mary (Leighton) Rollins, and three of their adult children, Augusta, Hannah, and Edwin. In addition, they were joined by the widow of another son along with her two young children, Harry and Theodore.

As the family expanded following the marriages of Harry and Theodore, three additional houses were constructed at 7, 9, and 11 Cottage Street.

By 1910, of all the family members who came to Wellesley four decades earlier, only Harry Rollins was still alive. It was at this time that he began to develop the rear part of his family’s estate, laying out Appleby, Homestead, and Leighton Roads. (It is suspected that Appleby, like Leighton, was a family name.) Many of these lots were purchased by members of the Wellesley College community.

Following Harry’s accidental drowning in the Charles River in 1933, his widow, Margaret, and their son, Leighton, left Wellesley but retained ownership of the property for four more years. The original Rollins family mansion, having sat vacant and fallen into disrepair, was razed in 1938.

For unknown reasons, Wellesley College acquired the property in 1945. Given, however, that many students lived off campus at the time, it is entirely possible that the College intended to construct more student housing on this parcel of land. That plan, however, may have fizzled following the construction of additional dormitories on campus in 1952.

The Rollins property instead became woods and remains so today.

3 thoughts on “Rollins lot: other parcel going on the market”