The following article appeared in the Wellesley Townsman on December 3, 2015. 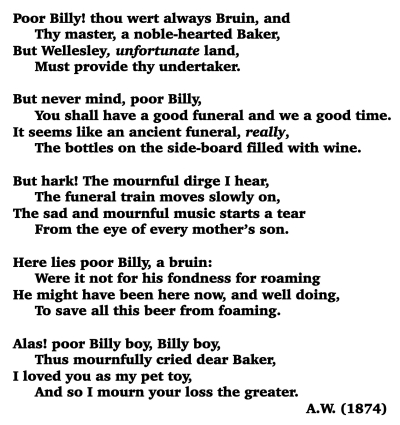 Source: History of the Black Bear (1874) by William Emerson Baker

If Billy Bruin had been born human, it’s all but certain this article about his funeral would not exist. Billy was, after all, only two years old at the time of his death and hadn’t accomplished much in life. There just wouldn’t have been any reason to hold a large ceremony.

Its orchestrator was sewing machine magnate William Emerson Baker. Much has been written over the years about Baker and Ridge Hill Farms, the amusement park he constructed and operated during the 1870s and 1880s on his 700-plus acre estate on Grove Street straddling what is now the Wellesley-Needham line.

In the words of Les Crumbaker of Needham — the author of the definitive guide to the history of Ridge Hill Farms — Baker was “a man of whimsical ideas and…a compulsive, completely uninhibited party-giver. He delighted in inviting the great and near-great of Boston, of Massachusetts and of the Nation to costly and imaginative parties…”

Such is all that is needed to explain why the funeral of Billy Bruin came to be. Baker was just looking for an excuse to throw a party. Indeed, he had owned the large black bear for one day before it escaped and subsequently died.

The details regarding Baker’s acquisition of Billy Bruin is an oft-neglected part of the story. It began in mid-July 1874, when Baker responded to an advertisement that two young bear cubs were for sale in Boston’s North End. Always on the lookout for wild animals to add to his amusement park — which already included an alligator, buffaloes, and an ibex — Baker purchased the pair of bears and directed that they be transported to Ridge Hill Farms.

Only one bear would arrive. As explained by a Boston Journal reporter, “…[W]hile awaiting transportation, the bears became restive in confinement, and the neck of one becoming encircled in the chain of the other and more vigorous bruin, the young cub gave up the ghost…”

So this was the bear whose funeral is the subject of this article, right? Think again. There’s a third bear in this story: Billy Bruin.

Having heard of Baker’s disappointment that one of his two new pets never made it to Ridge Hill Farms, a showman soon thereafter contacted him and offered to sell him Billy, a large beast who had become too formidable to handle. Baker jumped at the offer. Arrangements were then made to deliver this third bear to the railroad depot in Wellesley Square.

It was Tuesday, July 14th, when the train rolled into the station with Billy on board. The one and a half mile trip down Grove Street, however, would have to wait another day, as Baker’s men, for some unknown reason, were unable to transport him from the depot. The bear thus remained overnight in his cage on the train.

Perhaps this was a mistake. By the time Billy Bruin arrived at Ridge Hill Farms the next day, he was feverish and restless.

Yet rather than housing the wild animal in an appropriately constructed brick and steel barred enclosure, Baker’s handlers chained the bruin to a tree.

Two more errors of judgment would spell the end of Billy’s captivity. The first occurred later that evening when Baker approached the bear completely unaware that his two dogs were accompanying him. Immediately upon sight of the canines, the bear lunged towards them and broke free from the tree.

The Boston Journal succinctly describes the fourth and final mistake: “Taking in the situation at a glance, Mr. Baker left two men to watch the bear, while he went to procure means by which to capture him…[T]he men who were left to watch the bear, realizing the truth of the adage that ‘two is company, and three is none,’ fled from the presence of the brute, who deliberately sought to roam in the umbrageous shade of the forest…”

Nearly five hundred pound Billy Bruin was now missing. At once, a search party of roughly 40 men was sent out, armed with lumps of sugar — the bear’s favorite snack — to lure the animal, and clubs should it attack.

But the bait didn’t work. Although one group of hunters found Billy in one of the quagmires that dotted the forest, he vamoosed deeper into the woods upon sight of the men, broken chain dragging behind him.

So Baker upped his efforts to capture Billy, including stationing men with rifles in treetops as well as using his recently acquired cub from the North End — a bear he called Topsy — to cry out for his fellow brethren. Again, no luck.

What followed was a week of terror for the inhabitants of Wellesley and nearby towns. But it must have been worse for poor Billy Bruin. Lost, hungry, and scared, the bear scavenged for food, slept wherever he could find shelter — including under the Dedham Congregational Church — and escaped from hostile residents who feared that Billy would kill them with one powerful swipe of his clawed paws.

The search would end ten days after it began when the bear’s lifeless body was found washed up on a beach in Hull. Billy Bruin had drowned. Whether he was looking for food, trying to cool off from the summer heat, or attempting to escape from danger will never be known.

No more than 48 hours later, the planning for Billy Bruin’s funeral was already complete. It would be held on the afternoon of August 8th — the nearly two week delay due to the time required to have the large bear stuffed by a taxidermist.

The funeral kicked off that day with the arrival of hundreds of Baker’s friends at the Wellesley depot. There they were met by a fleet of vehicles that would bring them to Ridge Hill Farms, including horse-drawn phaetons, a jaunting car, a large boat on wheels, as well as an omnibus that was filled with young women dressed in full mourning outfits.

Once at the Baker property, a large funeral procession was formed on the Conservatory Lawn (at the current site of 380 Grove Street in Needham). But this wasn’t your typical procession. Rather, it was comprised almost entirely of people wearing elaborate costumes that in some way, shape, or form were puns or (attempted) humorous references to bears and Billy Bruin’s notorious escape.

What follows is a partial list of the participants: the Grand Marshall (Baker) a la cheval, the stuffed corpse of Billy Bruin on a bier carried by four men wearing animal skins to represent the Bulls and Bears of the Financial District, 5-month-old bear cub Topsy, the 20-piece Natick Cornet Band, men dressed as frogs to symbolize the greenbacks of American finance, someone dressed as a monkey as a nod to the wise heads who thought they knew how to catch Billy, Native American hunters, a “black man turned white with bare fright,” and following up at the rear, a handful of babies that supposedly had been swallowed by the bear.

From the Conservatory Lawn, the procession, with the other guests trailing behind, turned south on Grove Street, entered the main Ridge Hill Farm grounds on the west side of the road, and marched along the eastern shore of Sabrina Lake to the “In Memoriam Grounds” (now the site of 11 Sabrina Farm), where Billy Bruin was placed within the collection of Baker’s other taxidermied pets.

Visitors then spent the rest of the afternoon and evening socializing over refreshments and a supper of roasted meat.

Unfortunately — to the disappointment of the hundreds in attendance — much of the day’s enjoyment was ruined when a large rainstorm passed through. Baker, however, saw this as an opportunity. An opportunity to have yet another bear funeral!

So the entire day’s affairs were repeated on August 19th. This funeral, however, had even more to it than the first. Concurrent with the celebration of Billy Bruin’s short life, the participants also honored Baker’s pet swan, Leander, who on the evening of the first funeral, failed to notice Herod the Alligator in the Arboretum Pond and tragically met a similar fate to poor Billy.

Of course, this wasn’t the last time Baker threw an elaborate party for no good reason. There was the laying of the cornerstone of the Sanitary Piggery, the dedication of a cannon with the entire Light Infantry Regiment of Charleston, South Carolina present, as well as the Krino Hygiene Palate Parties, a series of fetes organized by Baker to “illustrate the influence of Good Cheer and the Stomach on the Brain, the Health and all the Relations of Life.”

But it appears to have been the last animal funeral. After all, how could William Baker have topped the auspicious celebration of the inauspicious life of Billy Bruin?